More content in this section
Welcome
About Harnett County

The Board voted to appoint Stewart county manager during their April 24, 2018, special session. Stewart has worked for the County for 22 years and has served as interim county manager since October 10, 2017, following the departure of then-County Manager Joseph Jeffries.

Harnett County Board of Commissioners Chairman Gordon Springle said Stewart’s tenure with the County, the respect she has from the County’s department heads and employees, and her performance while serving as interim county manager all contributed to the Board’s decision to name her county manager.

“She has proven herself,” Springle said. “She leads by example and I think she’s going to be able to lead the County with a forward-looking and progressive approach.”

He said Stewart’s previous role as the County’s IT Director allowed her to work closely with other county departments and learn what they do.

“I think that knowledge is invaluable as far as a County Manager is concerned,” he said. “It’s also important that she is committed to Harnett County because she is from here.”

Stewart said she has been humbled by the outpouring of support and encouragement she has received from her family, coworkers and the community, both during her time as interim county manager and throughout her career in public service.

“When I came to Harnett County, it was never part of my plan to become County Manager,” said Stewart. “But I feel like God had a plan and when former County Manager Joseph Jeffries asked me to come join the administrative team as his deputy three years ago, it was a difficult decision, but I believed I had something to offer.”

Stewart said there is something special about managing the County where she has spent her life and raised her family.

“I can’t think of a more gratifying feeling than to be able to come to work every day and feel like you’re making a difference in your community,” she said. “You never know exactly what the day is going to bring, but it is incredibly fulfilling to know that what you’re doing makes a difference and that you’re hopefully improving the lives of your neighbors and fellow citizens.”

She said her priorities as manager will be to focus on improving customer service to the county’s residents, expand access to County services, enhance communication with citizens and tell Harnett County’s story throughout the region, and manage growth in a fiscally responsible and sustainable way that preserves the past while embracing the opportunities that come with that growth.

“I appreciate the Board of Commissioners giving me the opportunity to continue serving the citizens of Harnett County in this capacity and for putting their trust in me to lead Harnett County through a very exciting period in its history,” Stewart said. “It’s not just about me – we have a great team of knowledgeable and dedicated employees who truly want to see Harnett County thrive.”

Stewart grew up in Lillington and currently resides in Angier. She holds a bachelor’s degree in Business Administration from the University of North Carolina at Chapel Hill and is a Certified Government Chief Information Officer with the UNC School of Government.

Prior to her employment with Harnett County, she worked at N.C. State University for nine years as a budget analyst and applications analyst. She attends Angier Baptist Church. She and her husband, Del, have been married for 28 years and have two daughters – Kelly and Natalie. 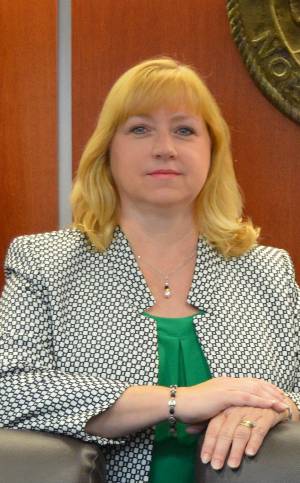